Almost every time I go to a Tapas restaurant, I order a Spanish Tortilla a.k.a Tortilla de Patatas they’re so simple, but SO GOOD. Spanish Tortilla’s are not like Latin American Tortillas for tacos and stuff, they are more like omlettes, but made with potatoes, onions, and whatever else you want to throw in there. 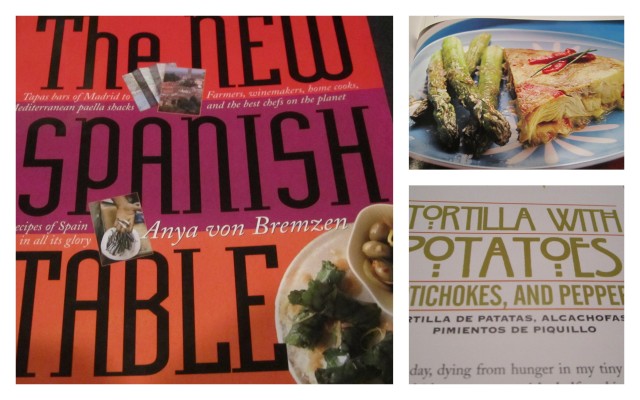 When looking through one of my cookbooks, The New Spanish Table for some dinner ideas I came across an interesting version of the Spanish Tortilla, a Tortilla with Potatoes, Artichokes and Red Peppers. I was immediately interested in this recipe because artichokes are by far my favorite veggie, and roasted red peppers are a close second (salt, mmmmm..). Also, I had never made a tortilla before and I was feeling a little adventurous. Then I did some research online to check out some “tortilla best practices” because I knew that keeping the tortilla in its shape would be pretty difficult. THEN I found out one of my all time favorite blogs, Smitten Kitchen had made this exact recipe last year! It was meant to be. 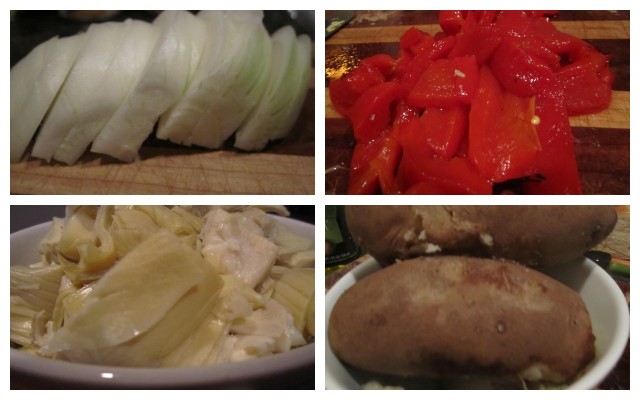 You’re probably wondering, “where the hell is the cheese in this recipe?” I was too, and trust me I wanted to add it, but I had never seen cheese in a tortilla before so I went with the experts on this one.

When all was said and done, the tortilla turned out amazing (after a couple attempts). My first tortilla attempt was an epic fail, it came out compltely crumbled (we still ate it), but the next two came out really well. The key is patience, I got too eager to flip it and it broke. Wait the extra couple minutes to make sure it’s ready to go so it won’t break.

Another great thing about Tortillas is eating then as leftovers. The next day I brought some Tortilla to work for lunch, and it tasted even better then the night before!

Tortilla with Potatoes, Artichokes and Peppers – Recipe from The New Spanish Table by Anya von Bremzen