2 weeks into dating a vegetarian and I must say I’m pretty surprised by all the amazingness I’ve discovered that is available to those who choose not to indulge in delicious things like burgers and pulled pork and meatballs and bahh. Just thinking about not eating meat makes my head hurt. Luckily my boyfriend has been doing a great job at finding nom-tastic places for us to eat that are able to satisfy both our cravings. This week was no different when he suggested trying out Ariana, the new Afghan restaurant located in Brighton.

You may have heard of Ariana before, which shot up to the number one spot on yelp in a mere 4 months just after opening, and where it still resided until just a day ago. I have to admit, when I saw the reviews I was wondering how so many people had been let on to this place in such little time. I was immediately intrigued and eager to check it out.

When we got there it was pretty busy, and it seemed like almost everyone was eating the same thing. It was big, it was orange, and as soon as I saw the menu I realized it was pumpkin.

Well actually it was Kaddo, which is an Afghani pumpkin. It was pan-fried then baked and seasoned with sugar. It came with a side of yogurt sauce, and it was unbelievable. If you’re lucky enough to get your hands on some Kaddo, I vote replacing the yams at this year Thanksgiving with this perfect alternative. They also make another version of this dish for meat-eaters which comes topped with a meat ragu sauce. MmmMMm.

Obvious bread basket shot. LOVE Naan! The dipping sauces are mint yogurt, green chili and I’m not entirely sure about the last one. It was red and kind of sweet.

Then we tried the Aushak; a ravioli filled with leeks and scallions served with (of course) some mint yogurt sauce. This was so good I ended up getting another order that was topped with ground beef and it was even better. For dinner we ordered the…

Bowlawni, which came with two pastry shells, one filled with leeks and scallions and the other with spiced potatoes garnished with mint yogurt. Almost like an empanada, but Afghani. 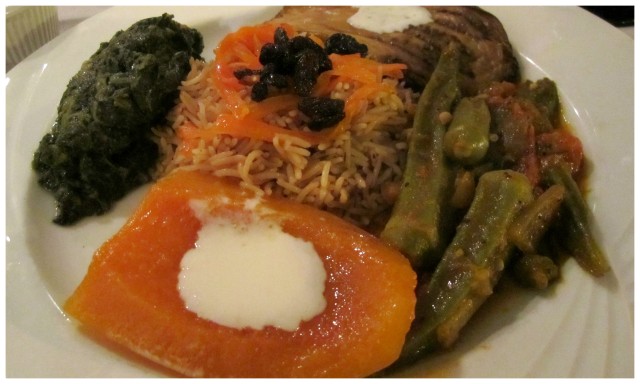 And the vegetarian special: a platter of baked pumpkin, pan-fried eggplant, sauteed spinach and okra cooked with fresh tomatoes and served with pallow rice. Sort of like a vegetarian pu pu platter. It was really good as well, and shockingly enough I discovered… I like okra.

I was so proud of myself for making so many somewhat nutritious choices that we decided to go for two desserts. Not that I wouldn’t order two desserts had I eaten all fried food either. But oh well.

First the Feereny, a cream pudding topped with fresh strawberries, pineapple and blueberries. We also tried the Bucklawa, which was pretty similar to Greek Baklava.

Just looking at it puts me in a good mood. All those layers of thin pastry goodness topped with walnut and pistachio shavings and the topped with honey and caramel… SO GOOD! The whole meal was beyond impressive. I must say my first experience with Afghan food was pretty much phenomenal, and the prices weren’t too bad either. I will definitely be back again.