Fabio got me in the mood for chicken cacciatore. After watching the classic Italian episode of Top Chef I couldn’t stop thinking about it. This is unusual because chicken really isn’t my thing. Everyone seems to love it but I think it’s boring and kind of sketchy. Why can’t it be served raw? Ok I know the answer to that, but still it’s weird. Even with my aversion to chicken, I still wanted to make chicken cacciatore. I don’t know if it was Fabio’s-a eye-talian accent, or mountain of tomatoes on top of each piece of chicken, but I had to have it, like ASAP.

I used Giada de Laurentiis’ recipe from the Food Network. With 600 positive reviews, it looked like a pretty good one UNTIL I saw the the Pioneer Woman’s recipe. Damn. I immediately wished I had bought all those ingredients instead. Oh well, close enough.

First cover the chicken in salt and pepper, then dredge it in flour.

Heat the oil and butter in pan, when hot cook the chicken for about 5 minutes per side – making a crispy crust on the outside layer. The original recipe didn’t have butter, but per the Pioneer Woman’s recipe, I added it. Yum. Don’t crowd the pan! Do this in batches using tongs. When the chicken is done, set it aside. 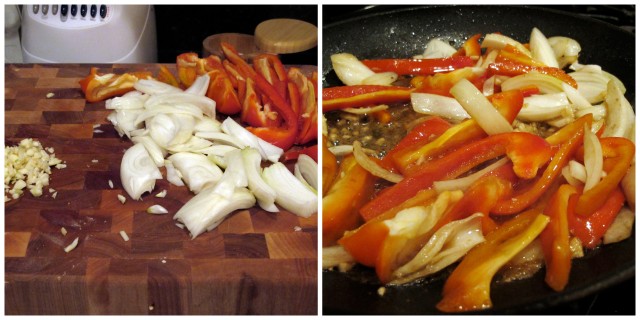 Then cook the red pepper, onion and garlic in the same pan for about 5 minutes. Then add the wine and simmer for about 3 minutes, reducing by half. 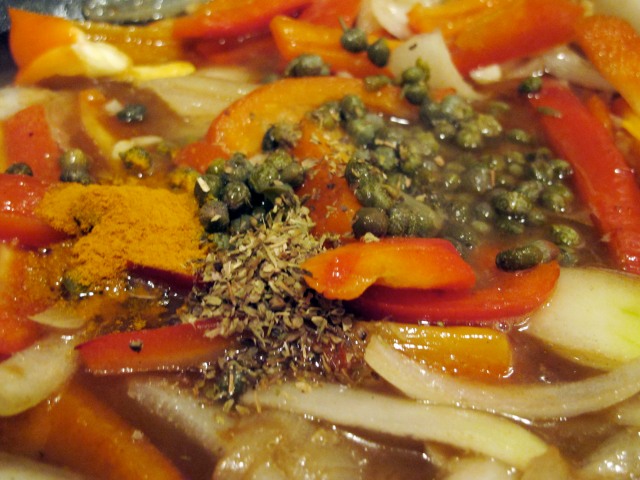 Then add in the capers, oregano and TURMERIC (this wasn’t on the original recipe but I think it was a great addition).

Then add the tomatoes and their juice, and the chicken broth.

Then throw the chicken back in the pan and bury it with all the good stuff. Then bring the sauce to a simmer and cook until the chicken in cooked through, about 30 minutes.

In the meantime boil some pasta to serve with it. When the chicken is done, remove the chicken and veggies from the using a slotted spoon and let the sauce reduce even more, so it becomes thicker and better for use on the pasta. 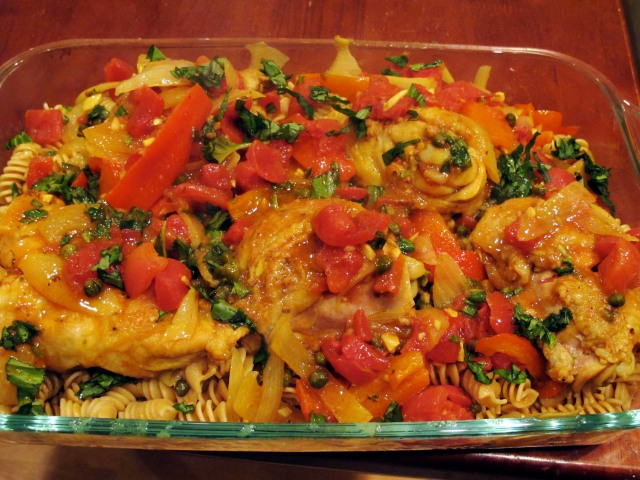 Then put the pasta in the dish, and top it with the chicken, veggies, sauce and chopped basil. Then serve.

This dish turned out great and it was a huge hit. I wish I had some Parmesan to sprinkle over the finished product. And I’m thinking about doubling the about of tomatoes next time I make it, is that overkill? I just miss tomatoes! The bottom line: chicken cacciatore is a comforting pasta dish packed with protein and perfect for the winter. Plus its super easy to make and requires no special equipment or ingredients.

And now…the WINNER of our Food Should Taste Good Giveaway…….

Congrats! Shoot us an email at JustAddCheese@gmail.com to redeem your fabulous box of chips.